Once in their lifetime all Muslims are obliged to undertake Hajj, or pilgrimage to Mecca. A tradition stretching back thousands of years the journey to the Great Mosque was often a trip of epic proportions for those muslims who found themselves living far from its location in what is now modern day Saudi Arabia. However, in an age where aeroplanes and package travel have shrunk the world, most pilgrims now elect to travel by modern means.

This summer a group of cyclists from Whitechapel, East London are aiming to instead complete the arduous journey of 2,200 miles from the capital by bicycle.

‘Up until then, honestly, I thought I was the only Muslim cyclist in London. I’d been cycling since the age of 9 or 10, and on a road bike since 2007, which I used to commute to university, work and to the mosque, where I currently work and am trying to get Muslims on bikes,’ explained Muhammd.

‘I think it’s working. There’s a

‘Last year an individual cycled from China for Hajj, and a couple of weeks later a Russian. In previous years two people cycled from South Africa. So that means the way from the Far-East, Eastern-Europe and Africa have been paved.

‘We hope to be the pioneers of this epic journey from the Western Hemisphere,’ he added.

Along with being involved with the Ride 4 Your Mosque initiative that encourages the community to take up cycling for a healthier lifestyle, Muhammd and other riders have been busy taking part in long distance cycling over the weekends for training, including in the Cotsworld and the Chilterns. 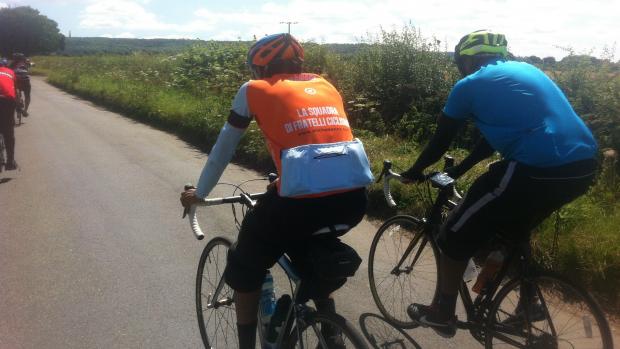 ‘We aim to cycle little and often during the week and try to sign up for sportive events when possible.

‘On one sportive last year I was fortunate enough to meet Chris Froome, who I spoke to about Hajj Ride and he gave me some really good advice on training and nutrition,’ Muhammd told Cyclist.

Scheduled to depart on 14th July 2017 they plan to travel for six weeks, climbing 110,000 feet of elevation and crossing through seven countries on the way to Medina, where they’ll join the around two million other pilgrims making the annual trip.

Sleeping out in tents they aim to travel light with the intention of covering around 80 miles per day. Once they reach Saudi Arabia they’ll have to contend with desert conditions and average temperatures well above 40°C.

Billed as ‘The Pedallers’ Pilgrimage’, along with fulfilling the Hajj the participants are looking to raise significant sums to send ambulances into Syria, which is currently beset by a brutal civil war.

Working with Human Aid, each of the registered riders is aiming to raise £30,000 to support the charity.

With riders from 15 countries having expressed interest, the selected riders will spend the next next few months training together and via Strava in order to be ready to depart come July.

BBC Teach: What is Hajj?

View all posts by abubicycles